When you encounter a situation where you’re arrested, your first concern will be to get yourself out. It’ll lead you to question whether you can do it independently. After all, spending days behind bars until the hearing can be stressful.

We understand how tough the situation can be and help families through the bail process. Here’s what you should know about posting the bail bond process and whether you can do it yourself to get out of jail.

Bail: What You Should Know About Bail Bonds

In some cases, the court permits the accused to pay money to get out of jail. This amount is called bail money, which you pay for your release until the initial court hearing. It’s based on the following factors:

Posting a bail shows promise that you’ll appear in court hearings, and failure to do so can lead to re-arrest.

The purpose of bail bonds is to help people who can’t afford to pay the bail amount. A bail bond agent represents you in court and promises to pay the amount if you fail to show up in court.

A bail bond agent will have you sign a bail bond agreement, and you pay a non-refundable fee which is the percentage of the bail amount. Typically 10% of the total bail cost, but the amount may vary.

You can post a bail bond yourself. If you get arrested, you’ll be held in jail until arraignment. Arraignment is an initial court hearing where the assigned judge sets the amount for the bail bond that needs to be paid before the release. Once the judge sets the bond, you can pay the full amount to get out of jail. 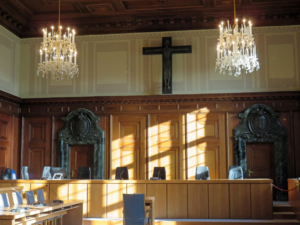 Not surprisingly, doing it on your own isn’t as easy as it may sound. Many people don’t have that kind of money on their person when they’re arrested. One of the caveats of posting bail cash is that you must pay the full amount to get a release. Otherwise, posting a bail bond with the help of an agent is your best bet.

Why do it alone when you can get help? DeLaughter Bail Bonds offers affordable bail bonds in Wabash County, Allen County and other major counties in Indiana. We help you and your loved ones through these tough times by offering 24-hour bail bonds service.

Contact us for inmate information, types of bail bonds, or to locate your loved ones.