What is an arraignment? It’s a hearing in which an individual, who abused you with a crime, is formally charged by the court.

Usually, arraignment is the first thing that happens in the court when the abusive individual is detained, and the district attorney files a complaint against them. However, the arraignment will normally happen after the ‘show cause’ hearing if you choose to file the complaint on your own. Here’s what happens at the arraignment:

While you don’t need to attend the arraignment, you can always go if you wish. However, the court wouldn’t ask you to participate in the discussion at the arraignment – but the assistant district attorney may allow you to voice your concerns or opinions at some other hearing. The assistant district attorney will tell you the date for appearing and testifying about the abuse.

What happens after the arraignment? 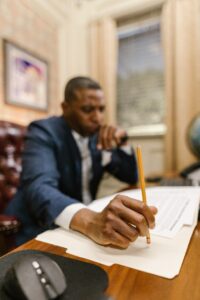 The abusive individual will have to go to court to attend a pre-trial conference. During this conference, the case may be settled if the abusive individual pleads guilty. However, if this person doesn’t plead guilty, a trial date will be set by the court. You’ll be informed about any dates by the victim/witness advocate at the office of the district attorney.

Will someone inform you if the abusive individual gets released on bail?

If the abusive individual pays bail and the court releases them, the police should inform you. But sometimes, the police won’t tell you. However, you can always call the victim/witness advocate or courthouse to check. If they’re released, always review your plans to stay safe.

Will the individual who abused you have to go to jail post-arraignment?

At DeLaughter Bail Bonds, our mission is to become a premier provider of bail bond services in Fulton County, Huntington County, and Whitley County, IN, while being non-judgmental and offering utmost professionalism, respect, and standards of service. As the best bail bonds agency, we believe everyone is innocent until proven guilty – and it’s your right to be released on bail before trial.

Call us now for more information!