The judge sets a bail amount based on the schedule. However, they can lower or raise the amount considering different circumstances and case conditions.

The court also reviews the nature of the case and a defendant’s criminal record. Generally, past crimes affect the amount or chance of getting bail altogether.

You can hire a bail bond service to get a quick release. However, it would help if you familiarized yourself with the conditions that affect your bail.

How Does Court Set Bail?

If you’re arrested on a criminal charge, you’ll go through arraignment – a brief initial hearing within 48 hours. The judge determines whether you’ll receive bail or not. The judge will set the bail amount if you receive the bail.

What makes the court deny bail?

The court considers certain factors during its decision to approve or deny bail. Your bail can be denied on the grounds if:

However, if the court believes that the accused will appear in all hearings, then they may be released on bail or their recognizance. If you’re released on your own recognizance, you won’t be liable to pay bail money. The bail amount may range from $500 to $100,000, depending on the charge and court.

How Do Prior Records Affect Bail?

We’ve established already that having a history of criminal record can influence the decision to grant you bail. It can also increase the bail amount.

For instance, if you were charged with a vehicle misdemeanor in the past, the judge may increase the bail amount if you violate the law again. In other cases, the court can raise the bail amount massively if you have a strike on your criminal record from a previous felony conviction.

Even if you don’t have a strike, the bail amount can increase for more than one charge. 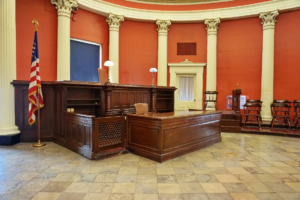 The judges also evaluate a defendant’s criminal record to determine whether they’ll respect the law after release. Multiple convictions in the criminal record show that the defendant doesn’t comply with the law, which can motivate the court to raise the amount and set stringent restrictions.

Get Bail Bond Services 24/7 in Indiana

Multiple factors affect the bail amount. It’s hard to pinpoint the exact cause behind a raise or decrease in bail money. Nonetheless, you can get affordable bail bond services in Indiana to secure quick release. DeLaughter Bail Bonds employs a team of licensed bail bond agents always on standby to help you secure bail.

Contact us today for the lowest bond rates in the state.