One of the common questions we often get from people is, “Will I get my bail money back?”

Although the concern is genuine, there’s no simple answer to this question. You may not get your cash back. We’ve explained in this guide what you should expect after paying for someone’s bail.

You can also directly reach out to us for inmate information or locate your loved ones in jail.

Bail vs. Bond: What’s the Difference?

First, let’s understand the distinction between bail and bond.

Bail is the money you pay to secure a release from jail. It assures that the accused will appear in court for case proceedings. Whatever amount the judge sets, you’ll have to pay the full amount to get out of jail. Fortunately, anyone can pay, so even if you don’t have the amount on your person, your friend or family can post bail money.

In contrast, a bail bond is posted by a bail bond agent who takes full responsibility for the accused. They assure that the defendant will show up for court hearings. However, you pay a non-refundable fee and sign a bail bond contract with the bondsman. This means you get out of jail by only paying 10% of the bail amount.

Getting Your Bail Money Back

Here’s a catch: the bail amount varies, and you may not be able to afford it. Besides, most people don’t have a huge sum of money on their person to bail themselves or someone else out of jail.

Compared to that, an agent expedites the process, and you can secure a release by paying a small commission fee to the agent. It’s a cheaper option, and you get the rest of the bail bond money back once the accused appears in court for the hearing. 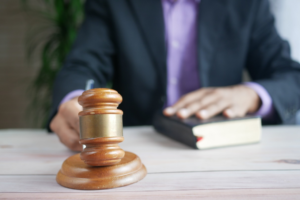 It’s better to forfeit 10% of the amount and secure a quick release with the help of a bail bond service than arrange for the full amount.

If you have any questions about bail bonds, you can ask DeLaughter Bail Bonds. We’re Indiana’s most dependable bail bond service offering 24-hour bail bonds in various counties to secure quick release. You can contact us for further information.